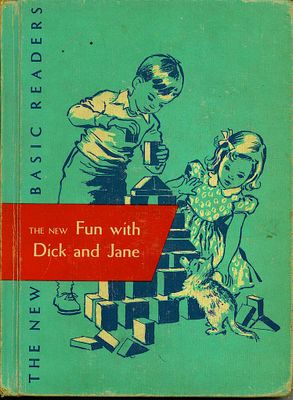 *As you may have noticed from the title of this post, the name of one of the characters has been altered throughout this blog. This is due to the profanity filter on the Macmillan Learning Community Site, which flagged and filtered his name. To avoid this issue, I've taken some creative license.

Well, we managed to have an election after all, so in the spirit of a little decompression I thought I'd tackle something a little lighter for this blog—which isn't easy in the face of an ongoing pandemic amidst a society that appears to be unraveling. So when, while searching for something else I happened upon a book called Growing Up with D-ck and Jane (1996) and, glancing through it, found something semiotically interesting that I didn't expect to find there, I thought that here was an opportunity for a simple and rather upbeat analysis. But upon further exploration, I find that the thing isn't quite so simple after all—which makes it at once more interesting but less upbeat. Let me explain.

For those unaware or too young to remember them, D-ck and Jane are the two main characters (along with younger sister Sally) of a series of basal readers used to teach children to read, whose popularity peaked in the 1950s. I wish to make it clear that I am fully aware of the naivete inherent in D-ck and Jane's notoriously sanitized promotion of suburban middle-class mores. Indeed, by the mid-sixties D-ck, Jane, and the whole happy crew had become such a laughing stock to my generation that now that I am in my mid-sixties I am hardly about to get nostalgic about them. No, that isn't what this blog is about.

Rather, the thing that struck me as I paged through the text was the reproduction of an old D-ck-and-Jane narrative set in a toy store, wherein Sally, then Jane, then D-ck, all express a desire for a certain toy, only to be reminded by the others that they already have something like it at home. Each time this happens (and then one last time for good measure in chorus) the children renounce their desire for the new toy and pledge themselves to being content with the toys they have.

Corny? Yes, of course it's corny: D-ck and Jane are the epitome of corniness. But that isn't the semiotic point. The corniness is something I expected; what I didn't expect was a homily against what Laurence Shames calls "the hunger for more"—certainly not from an era when America was being aggressively transformed by the mass media into a consumer society. After all, this was the time when television began its ongoing campaign to train children to become lifelong, brand-loyal consumers (collect the whole set!). So I was pleasantly surprised to find in this little morality play a promotion of contentment with the things one already has. Think of it! D-ck and Jane going against the grain!

But alas, here is where things get complicated—indeed, self-deconstructing. For when I plopped down Growing Up with D-ck and Jane next to my computer in order to write this blog, I found in a flap attached to the book's cover a little booklet entitled Fun with D-ck and Jane: A Commemorative Collection of Stories, which just happens to contain a counter-story of how Jane once came to be given three talking baby dolls for her birthday, and happily embraces all of them. But wait, in the homily I've briefly described above Jane is persuaded not to covet a talking baby doll when she already has two dolls at home! Surely then, when three dolls show up as she opens her presents, the story might have resolved itself otherwise than with Jane's ending up a whole "family" of them.

Well, perhaps I'm not being fair. After all, Jane doesn't ask for the dolls herself in the story: D-ck and Sally tip the wink to Father and Mother for her (it isn't clear how a third doll comes into the picture, however). So Jane isn't herself being greedy, and perhaps the message here is that Jane's birthday "triplets" foreshadow (and condition) her future role as a wife and mother—which is a whole different analysis. Still, my discovery of this second story did change the trajectory of my essay, prompting me to note, first, that it always pays to research one's subject carefully before committing to a semiotic interpretation of it, and second, that in a consumer society you can never really get away from consumption. After all, Jane’s happiness with her inadvertent windfall of talking dolls in the second story suggests that more is better.

This sort of well-nigh inevitable contradiction is something to keep your students on the lookout for as they conduct their semiotic analyses of American popular culture. For even The Simpsons (which could be seen as a parody of the whole D-ck-and-Jane universe), can contradict its own anti-consumerist ethos. I'm reminded here of the famous collaboration with Banksy, which, while sending up the exploitation of Third World workers who produce Simpsons paraphernalia, effectively commodifies the dissent (in Thomas Frank's words) of viewers whose attraction to the show draws in the commercial sponsors whose advertising dollars reproduce the very conditions that The Simpsons satirizes. You can't escape.