Collaboration and Heather McGhee’s The Sum of Us 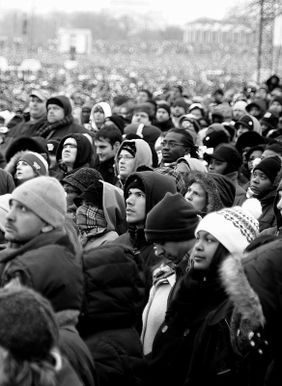 The subtitle of Heather McGhee’s book, The Sum of Us: What Racism Costs Everyone and How We Can Prosper Together, sums up the argument she makes in this clear-eyed and (somewhat) hopeful book that kept me turning the pages with growing interest. McGhee, former president of the liberal “think-and-do” tank Demos and current chair of the board of Color of Change, a nonprofit organization focused on racial justice, is an expert in economic policy. In this book, she describes the path that led her to question whether changing policy could ever succeed in changing the racist “zero-sum” culture of America, one that insists that if one person or group gains, another must lose.

This realization took her away from Demos and on a lengthy journey across the United States, meeting with local leaders and ordinary people, as she sought answers to a question she had been asking about her own and other African American families since childhood: “Why can’t we have nice things?” Along the way, she discovers myriad examples of why “nice things” were and are denied, such as the decision made in Montgomery, Alabama in 1959 to pave over the local public swimming pool rather than allow African Americans to use it.

What becomes clear to McGee during her travels and investigations, however, is that the denial of “nice things” doesn’t just harm African Americans and other people of color. Rather, it harms white people as well, particularly white people who have bought into the zero-sum paradigm that progress for some means the opposite for others. In a series of stunning case study chapters, McGhee examines the hollowing out of the middle class, the decline of unions, the stagnation of earnings, and other moves that were grounded in racism that have taken a huge and documented toll on people of color—and also on lots of deluded white people as well, who cling to the “privilege” they’ve been led to believe in while the small group of very, very rich white people call all the shots and make all the money. Talk about cutting off your nose to spite your face!

McGhee’s somewhat hopeful conclusion is that what she refers to as the “solidarity dividend,” which can be gained by working together across racial divides, can benefit “the sum of us.” She came to this conclusion during the Trump years and especially when she realized that “the majority of white voters still supported an impeached president who lied to Americans . . . and mismanaged and downplayed a pandemic that cost more than 200,000 American lives in less than a year.” She was left, during the 2020 election, asking “how much suffering and dysfunction the country’s white majority is willing to tolerate, and for how elusive a gain.” Throughout, McGhee is no Pollyanna: she recognizes the horrors visited daily on Black people by deeply systemic racism. But she also recognizes the ironic fact of the effects racism continues to have on (almost) all of us.

McGhee’s book asks all of us to think hard about “the sum of us.” I think it’s worth telling our students about this book and asking them to read at least the introduction and one of its chapters, along with what she says at the end:

Everything depends on the answer to this question. Who is an American, and what are we to one another? Politics offers two visions of why all the peoples of the worlds have met here: one in which we are nothing more than competitors and another in which perhaps the proximity of so much difference forces us to admit our common humanity.

The choice between these two visions has never been starker. To a nation riven with anxiety about who belongs, many in power have made it their overarching goal to sow distrust about the goodness of the Other. They are holding on, white-knuckled, to a tiny idea of We the People, denying the beauty of what we are becoming. They’re warning that demographic changes are the unmaking of America. What I’ve seen on my journey is that they’re the fulfillment of America. What they say is a threat is in fact our country’s salvation—for when a nation founded on a belief in racial hierarchy truly rejects that belief, then and only then will we have discovered a New World. (288-89)

McGhee thinks (or hopes?) that working for such a “new world” is our “destiny,” and she challenges us to finally allow our diversity to be our “superpower,” so that the U.S. can become more than the sum of its very different parts.

Reading this provocative book has reminded me of why I have devoted a large part of my career to studying and advocating collaboration (and collaborative writing) not just as a methodology but as a way of life. A commitment to the practice of ongoing, ethical collaboration can go a long way toward building the solidarity McGhee calls for and claims as a “dividend” for all Americans. Her analysis has given me further reason to develop and foster collaboration as the foundation of all my teaching. At the beginning of term, I always ask students to work each other and with me to establish what we refer to as our “classroom ethos,” for how we will engage with and treat each other and for what our responsibilities to each other will be. McGhee’s book has given me many new ideas about how to introduce these concepts to my students as well as a much deeper understanding at just how much is at stake in practicing collaboration, achieving solidarity, and—just perhaps—reaping its dividend.