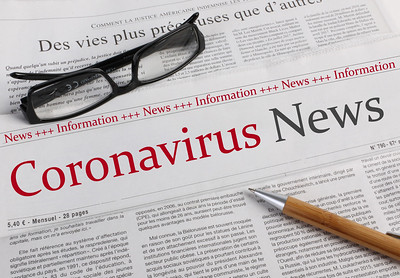 In an excellent February 2021 article in the Atlantic entitled “5 Pandemic Mistakes We Keep Making,” Zeynep Tufekci contrasts the recent reception of the COVID-19 vaccine with the reception of the polio vaccine in the 1950s: “When the polio vaccine was declared safe and effective, the news was met with jubilant celebration. Church bells rang across the nation, and factories blew their whistles. ‘Polio Routed!’ newspaper headlines exclaimed. . . . People erupted with joy across the United States. Some danced in the streets; others wept. Kids were sent home from school to celebrate.”

In contrast, on November 10, 2020, “[t]he first, modest headline announcing the Pfizer-BioNTech results in The New York Times was a single column: ‘Vaccine Is over 90% Effective, Pfizer’s Early Data Says,’ below a banner headline spanning the page: ‘BIDEN CALLS FOR UNITED FRONT AS VIRUS RAGES.’”

We teach our students how slanted language can affect an audience’s reaction, how the connotation of individual words can influence opinion. We are also influenced by what is included and what is left out or, in this case, what is emphasized and what is relegated to a single column.

Why is there so much emphasis in the media on the negative possibilities of the vaccines and so little celebration of the fact that they exist? Have we become so cynical that we worry about the new variants to the point that we can’t appreciate the drugs’ effectiveness in saving lives? This type of media coverage plays into the hands of anti-vaxxers who welcome any opportunity to denigrate vaccines. Opponents of vaccines in general or of these in particular like to argue that there is really not that much more that Americans can do once they have had the vaccine than they could before it. Yet well below the glaring headlines are the sweet stories about grandparents finally getting to hug their grandchildren again and of nursing homes cautiously opening their doors to visitors.

Does the news media’s reluctance to celebrate the vaccines arise from political partisanship? Perhaps. After all, former President Trump issued a statement recently on pseudo-White House stationery, trying to take credit for their existence: "I hope everyone remembers when they’re getting the COVID-19 (often referred to as the China Virus) Vaccine, that if I wasn’t President, you wouldn’t be getting that beautiful 'shot' for 5 years, at best, and probably wouldn’t be getting it at all. I hope everyone remembers!" His choice of verb tense (“if I wasn’t president”) reflects his refusal to admit that he lost the 2020 election, or perhaps he’s just not that astute a student of grammar. His supporters might celebrate with him his gift of the vaccines to the American people, but for others, the very thought of Trump’s mishandling of the pandemic from the beginning might dampen down any spirit of enthusiasm.  However, it’s not as though we have to give credit to former President Trump for the existence of the vaccines, but rather to the scientists who labored to create them and the volunteers who participated in the development trials.

Should our optimism be guarded because these vaccines were developed quickly? It was unprecedented to develop a vaccine, let alone several, in a matter of months instead of years. As Tufekci put it, “Vaccines that drastically reduce hospitalizations and deaths, and that diminish even severe disease to a rare event, are the closest things we have had in this pandemic to a miracle—though of course they are the product of scientific research, creativity, and hard work.” They show what can be done when the full power of the scientific and pharmaceutical communities come together in a shared mission – something, again, to be celebrated rather than feared.

Unfortunately, our nation is not prepared to come together, as a nation, to celebrate anything at this point. We could not celebrate together the inauguration of a new president - not when large numbers of Americans believed the former one’s claims of a stolen election. Nor could we, as a united nation, celebrate democracy and the peaceful transition of power because of those same dissenters, some of whom turned to violence in an effort to stop the lawful counting of electoral votes and disrupt the election of Joe Biden.

For the moment, everything is seen, still, in political terms. In a nation where wearing a mask to prevent the spread of COVID or not wearing one became a political statement and led to injury and death for some trying to enforce mask mandates, rolling up one’s sleeve for a vaccination can hardly be seen in apolitical terms. Likewise, it’s hard to celebrate the “reopening” of America when many feel it is coming too soon.

We long ago left behind the idea of news as an objective account of the world’s happenings. To deny the political leanings of the news networks would be ludicrous. Maybe the time has come to move back toward some type of balance at least. Ideally a network would report any problem with the vaccines while also reporting successes in getting the vaccines out to more people and making strides toward ending the pandemic—and to keep both sets of facts in proportion.

Maybe a time will come when, even if Americans don’t take to the streets in celebration, we can at least breathe a collective sigh of relief that we are returning to something closer to normal, in our news media and in our lives.

Image Credit: "A newspaper with the headline Coronavirus News"  by Jernej Furman, used under a CC BY 2.0 license