In my FYC with corequisite course this semester, I am experimenting with alternative grading to encourage students to engage with course activities and threshold concepts instead of grades. This past week, we reached the mid-point of the term, and I asked students to reflect on what they are learning about themselves as writers, readers, and language users.

For over half the students in the course, the system seems to be working as I intended: these writers are completing assigned preparation work, meeting with writing fellows, asking questions, contributing to discussions and peer reviews, and experiencing some ah-ha moments. They’ve produced multiple drafts (a literacy narrative, a discourse community profile, summaries, reflections, and a multimodal remix), and their consistent participation has earned them solid process grades. They’ve expressed surprise at the amount of work required, the extent of my feedback, and their own success. In short, they have engaged, fully, in this first-semester college writing course.

But for the remainder of the class, success in the alternative system has been elusive: they have routinely skipped required preparation, failed to share or submit drafts in progress, written cursory responses in peer reviews or asynchronous discussions, neglected my feedback, and overlooked significant instructions (often noted in bold and reiterated via email and our chat group). Their current process grades—which will contribute 60% to their final score—reflect their lack of engagement.

In some cases, I know why they are struggling: sudden changes to work schedules, hospitalization, Covid, a death in the family. Others report being unable to manage their time, lacking (or not understanding) technology, not finding the resources I’ve posted, and just not seeing the point of it all. 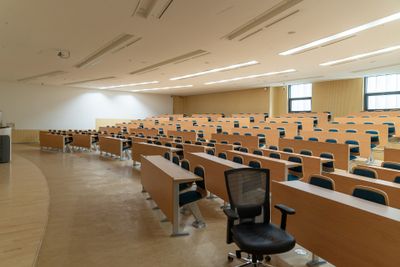 A picture of an empty lecture hall. Photo by Changbok Ko on Unsplash

Here’s the question: with half the course remaining, how can these students get back on course, get back up to speed? Are there on-ramps by which they can re-engage in the process?

Take the case of a student who missed a couple of classes and returned on a day I had set aside for uninterrupted writing (a 90-minute block of time for composing is a luxury for many of my students). About ten minutes into the session, this student approached and placed her laptop on the table in front of me. “I can’t seem to get started,” she said. I saw a blank Google Doc on the screen. I probed a bit. Had she watched all three assigned videos and completed the related preparatory steps?  No—she had begun with one video and a pre-writing exercise the week prior to her absence, but nothing else. During the week she missed, she had disengaged. It did not matter that all needed materials were posted and easily accessible: she disconnected completely from the course for a week. She had no idea how to proceed.

She needed an on-ramp to re-engage and meet the latest writing target—without losing more process points along the way. Together, we worked through one of the missing preparatory assignments (a planning chart), listed two additional steps to tackle at home, and then set a reasonable completion date (along with an opportunity to work with a Writing Fellow the next week). While she won’t recoup all the points she missed, she can get back into the rhythm of the course within a few days.

But now consider the student who completely disappeared for two and half weeks, during which he did not communicate with me or his classmates, nor did he log into the online repository of course materials and resources. He then emailed to let me know about his planned return.  He knew his situation was precarious, but he did not want to withdraw and lose the 5 weeks he had invested. He was seeking an on-ramp to re-engage and complete the course.

The same week this student contacted me, I received an email from another student, hospitalized and facing a life-changing diagnosis; she would have to miss nearly two weeks of class. The hospital internet was spotty, but she would do her best to catch up once she was discharged. Her life demanded that she disengage, at least for a few days, and she wanted to know where the on-ramp would be when she could return.

Much has been written, researched, and (quite frankly) assumed about abysmal completion rates in developmental and corequisite writing courses. There are certainly times when students need to withdraw or repeat our courses; these occasions, however, carry significant repercussions, from financial aid to degree progress, for the students involved. Early alert systems, intrusive advising, academic coaching, peer mentors—these are all systemic institutional efforts to keep students learning, engaged on a track to completion.

As an individual instructor, I can support these initiatives by designing individualized on-ramps when appropriate and feasible. At the same time, I must admit that these on-ramps require a lot of additional time and effort from me. If I had only one course, only a handful of students, it might be different. My workload, however, is much more extensive, as I suspect most of yours are. So I am wondering if there are ways to build such on-ramps into the syllabus or course design earlier, to create these flex points for re-engagement in advance. In truth, I am not sure what exactly this would look like.

If you teach FYC or corequisite courses, particularly with under-represented populations—or if you have adapted alternative grading (even ungrading)—how do you support students who want to re-engage after a brief break in participation? I would love to hear from you.

Want to offer feedback, comments, and suggestions on this post? Join the Macmillan Community to get involved (it’s free, quick, and easy)!

About the Author
Miriam Moore is Assistant Professor of English at the University of North Georgia. She teaches undergraduate linguistics and grammar courses, developmental English courses (integrated reading and writing), ESL composition and pedagogy, and the first-year composition sequence. She is the co-author with Susan Anker of Real Essays, Real Writing, Real Reading and Writing, and Writing Essentials Online. She has over 20 years experience in community college teaching as well. Her interests include applied linguistics, writing about writing approaches to composition, professionalism for two-year college English faculty, and threshold concepts for composition, reading, and grammar.
Topics