Artificial Intelligence and the End of Writing Instruction? 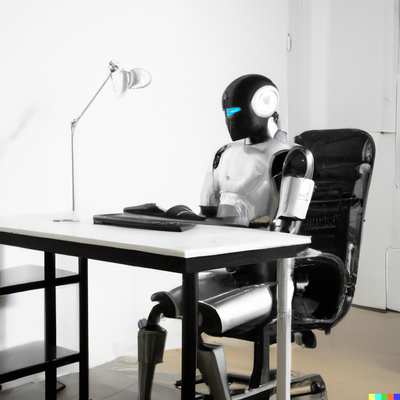 This image was generated by OpenAI's DALL-E.

In the September 14, 2022 edition of The Chronicle of Higher Education, Jeff Schatten asks “Will Artificial Intelligence Kill College Writing?” He then goes on to describe GPT3, a software program developed by an Elon Musk-supported nonprofit that offers writers a kind of Siri-for-writing: give it a task and it will come up with a written response to it—an often impressive response, as Schatten discovers:

I asked the AI to “discuss how free speech threatens a dictatorship, by drawing on free speech battles in China and Russia and how these relate to the First Amendment of the U.S. Constitution.” The resulting text begins, “Free speech is vital to the success of any democracy, but it can also be a thorn in the side of autocrats who seek to control the flow of information and quash dissent.

There are lapses and drawbacks, of course: the program will write about anything, even nonsensical requests, and it isn’t capable of generating text about questions for which it has no access to data that would help it create a response. Nor can it deal with highly complex topics—yet. Plus, it is free, and can’t be detected by anti-plagiarism programs. And it is certainly robust enough to suggest to Schatten and lots of others that that the need for instruction in writing may soon be obsolete. As Schatten puts it:

Given the rapid development of AI, what percent of college freshmen today will have jobs that require writing at all by the time they graduate? Some who would once have pursued writing-focused careers will find themselves instead managing the inputs and outputs of AI. And once AI can automate that, even those employees may become redundant.

I take these warnings seriously, and teachers of writing should be at the forefront of grappling with them. I also take seriously the fact that writing (not to mention writing instruction) changes as its circumstances change, and that we need to be carefully observing such changes and, if at all possible, staying at least a little ahead of them.

In that regard, I was deeply encouraged when I attended what the Program in Writing and Rhetoric at Stanford calls “September Sessions,” the days before classes begin when the staff meets together to prepare for the coming year. Marvin Diogenes, who along with Adam Banks directs PWR, gave the sessions’ concluding remarks, a tradition I have come to look forward to every year. And with good reason. This year, Marvin began by recalling a new name he had proposed for PWR: the Program in World-Building and Relationship, “with world-building in place of writing and relationship in place of rhetoric.” This view imagines the work we do as aspirational, as a path or a journey. As such, our classrooms

are alive with the vibration and burgeoning force of language always moving into more language… every language moment matters. It may seem to stay still on the page, on the screen, on the slide, but language lives beyond. We teach assignments, skills, practices, and habits: more than that, we teach a way of being in the world with language, open to all its possibilities for making sense, making meaning, making connections.

Marvin went on to describe how writing can be, must be world-building in addition to being about reporting information, performing intelligence, or expressing opinions. In addition, we create opportunities for students to experience world-building, teach them how to become world-builders, “with that purpose becoming an organizing foundation for all the other purposes they’ve encountered and absorbed in their lives.” So: writing as world-building.

In suggesting that we define rhetoric in relational terms, Marvin pointed to the inherent give-and-take, the dialogism, the conversational nature of rhetoric, which posits audience not as an abstraction but as living people we invite into a relationship and rhetorical strategies become ways not of manipulating or even persuading but of connecting. “We demonstrate intelligence,” he concludes, “not as an abstraction set forth for admiration but as a guide or light revealing the written world in the spirit of sharing ourselves and with the hope that readers/listeners will do sharing of their own.”

Rhetoric, one of the three original disciplines in the ancient Western world, has always been a plastic, supple art, adapting to changes in modes and methods and means communication. And writing has been similarly supple, developing to meet the needs of different cultures, languages, and times. We live in such a time, when our modes and methods and means—and purposes—of communication are changing, often so fast it leaves us gasping. Into this mix steps AI, with all that it offers, and all that it threatens. As teachers of writing and rhetoric, we have a front row seat: I see reason to be observing and listening and learning everything we possibly can about the changes taking place around us. But I see no reason to expect that such changes will “kill” writing or rhetoric. Or the need for their teaching.