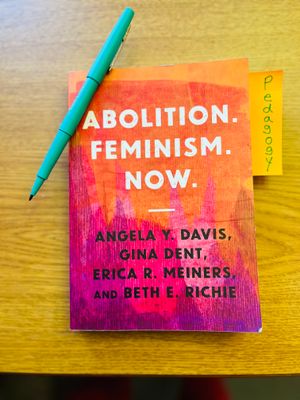 I just returned from the exhilarating National Women’s Studies Association conference in Minneapolis, the first time we’ve met in person since the pandemic began. The keynote address this year was by Angela Davis, Gina Dent, Erica R. Meiners, and Beth E Richie, whose book, Abolition. Feminism. Now. is making waves, and not just for feminist scholars. I attended pedagogically focused panels that , which invites us to think about the ways in which institutions—including universities—prop up the carceral state and also how they might work toward dismantling it. I was grateful for the community of caring instructors who invited me to consider the book in light of writing-focused classrooms.

In this cultural moment, “abolition” refers to the movement to end state violence, writ large. The core argument of Davis et al’s text is that “the movement to end gender and sexual violence … can never be isolated from the work to end state violence” (2). Whether or not you subscribe to that perspective, you might agree that core aspects of “abolition” describe what we do in writing classrooms, which is to help students analyze power structures, mindsets, cultures of knowledge, and ways of being.

If none of those approaches speak to you, perhaps the “abolitionist pedagogy” panel’s simple but profound final suggestion might: consider asking your students on the final day of class, “What have we learned? What have we un-learned?” When we—and our students—understand the significance of the second question, we will fully understand why the writing classroom feels like such a revolutionary (and perhaps even an abolitionist) space.