Throughout the history of the United States, women have shaped efforts to gain greater rights and achieve economic and social justice. But it wasn’t until the late 1980s that the whole of American history began to be included in textbooks, when Mary Beth Norton and a team of co-authors wrote the first American history textbook that attempted to integrate the 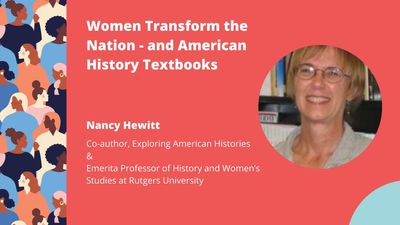 history of women, African Americans, immigrants and American Indians alongside that of men and white Europeans.

Since then, contextualizing history through different perspectives and offering a greater representation of diverse peoples has become much more common. This Women’s History Month, Macmillan Learning Author, Professor Nancy Hewitt, spoke with Macmillan Learning about some of those complexities and the women and movements that sought to gain greater rights and achieve economic and social justice -- all of which can be found in her textbook co-authored with Steven Lawson, Exploring American Histories.

“Stories of women and girls from diverse racial and ethnic backgrounds, classes, regions and religions now appear in every American history textbook,” noted Professor Hewitt, co-author of Exploring American Histories and Emerita Professor of History and Women’s Studies at Rutgers University. Within those different stories, women's activism is an important theme that helps to illustrate the complexity of American history over time. There were different perspectives from the activists on topics like the intersection of gender and race as well as which movements should be addressed first.

Here are some of the stories that Professor Hewitt shared:

In the 1830s, social justice movements were almost always segregated by race and sex, and women had limited roles. That started to change with women like Amy Kirby Post, who became involved in anti-slavery and women’s rights movements. Amy was raised in a Quaker farming community, and moved to Rochester, NY in the 1830s. While Quakers’ activism was generally limited to testimonies within the Society of Friends, Amy and her husband, Isaac, became active members of the Western New York Anti-Slavery Society, which was among the early efforts within social justice movements to create truly interracial and mixed sex organizations.

As part of that effort, she circulated anti-slavery petitions and forged more personal relationships across the color line by hosting Black activists in her home. The Posts also hosted traveling lecturers, including Frederick Douglass and Sojourner Truth, and participated in the underground railroad. In 1849, she joined with members of the city's African American Union Sewing Society to host an interracial dinner with the goal, according to Hewitt, of “persuading their white neighbors to embrace equality individually as well as philosophically.”

These efforts contrast with the goals of other activists of the time, such as Reverend Charles Grandison. His evangelical religious views led him to promote social reforms, such as abolition and equal education for women and African Americans. However, while denouncing slavery, he opposed women's participation in the abolition movement along with other activities he considered “political”, including expanding women's rights.

But the complexity of women’s movements and the fight for equal rights doesn't end there. Despite ratification in 1920 of the 19th Amendment, which stated that women could not be denied the right to vote on the basis of sex, the need for women's activism continued. Large percentages of Black women – like Black men – were denied the right to vote until Congress passed the Voting Rights Act in 1965. Women like Pauli Murray helped make the case for equal rights for Black people and women.

A descendent of white, African American, and American Indian ancestors, Pauli Murray grew up in North Carolina and moved to Washington D.C. in 1940 to attend Howard University Law School. There she led demonstrations against segregation in restaurants and on buses. She also wrote an important book on state segregation laws and her analysis was used to support the successful arguments in the 1954 Supreme Court Case Brown v. Board of Education. She went on to help launch the National Organization for Women (NOW). There she focused her attention on equal rights for all women, regardless of race or class.

Eventually, Murray’s support for NOW waned, as she believed that it became too focused on the ratification of the Equal Rights Amendment. She believed most NOW leaders failed to see that, as Hewitt explained, “race and class oppressions were deeply intertwined with inequalities of gender.” The era dealt with sex discrimination, but ignored the ways that Black and working-class women were discriminated against.

The ERA also sparked a strong conservative movement, led by Phyllis Schlafly. She was a conservative activist from California who gained popularity among housewives by claiming feminists disparaged them and wanted to do away with “natural” differences between the sexes. She also appealed to Christian women, whose values she claimed were under attack from feminists. These groups kept the ERA from being ratified.

In exploring American history, scholars now focus on the importance of women's activism across the entire span of American history. They illustrate the complexities of the various movements and the diverse goals of the participants. As with men, many of these differences were informed by the activists’ race, class, ethnicity, religion, region and political party affiliations. “Women activists embrace different, even opposing views about the kinds of change that would best serve their communities and themselves,” Hewitt said.

Because of this diversity, we find women involved in every important movement for social change, past and present. Hewitt said, “We can trace the deep roots of current campaigns to transform our nation back to its founding decades. Fully integrating these stories into American history textbooks can help to transform both the faculty who assign them and the students they teach.”