Below is a note written by Macmillan Learning Vice President of Diversity, Equity and Inclusion Coltrane Stansbury (@c_stansbury), as he reflected on the anniversary of George Floyd's death.

Tomorrow, May 25, marks the one-year anniversary of the murder of George Floyd. As I reflect on the tragedy of that event a year displaced from the shocking revelations of that dark day in Minneapolis, I am reminded of something that my mentor, Anthony Carter, would tell me early in my career in DEI- that no one truly looks like their story. Regardless of what our features and complexion might indicate about our heritage or even our surroundings might indicate about our upbringing, each of us is unique and rich with a story that only we can tell. Sometimes, not even the company we keep gives a true indication of the richness of our individual experiences, the successes and failures, tragedies and triumphs that make us who we are. 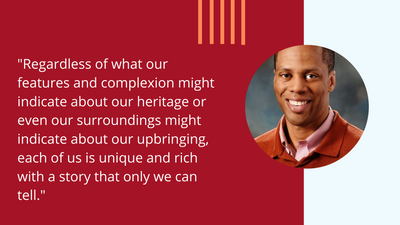 Quote from Coltrane Stansbury, VP of DEI at Macmillan Learning

We watched in the moments following May 25th of last year, as the eye witness video surfaced to the public, exposing us for the first time to images of George Floyd. Those video clips revealed to us a victim of a most brutal and cruel crime at the hands of those entrusted to serve and protect. As the media provided pieces of information about this man whose life was taken in front of the world, we were given a further glimpse into the challenging environment and circumstances that George Floyd lived through during his 46 years of life. The horror of the moment, the rushed context given to us by news outlets tell a short and poorly sketched narrative of who George Floyd really was.

As I think about what Anthony was trying to teach me about people and their stories, I realize that the true tragedy of those events a year ago in Minneapolis is that George Floyd did not have the opportunity to tell his full story. The real danger behind discrimination, injustice, and inequities is that they ultimately seek to silence a person’s story, relegating them to an irrelevant, invisible, or non-existent status in society.

But I realized, in the testimonies of his family and the tearful revelations of those who knew him best, that George Floyd indeed had a story to tell. That story is of a man who migrated across states to find opportunity, of a father who struggled through personal adversity to provide for himself and his family; of a beloved brother and friend who put the needs of others first even if it led to his own suffering. In many ways, I can see myself in much of his story of sacrifice, trials, hope and redemption. It is in George’s own story that we find out who he truly is and he is able to transcend the tragedy of that fated day where we shared in the shock of the ending of his life.

Anthony was right, the George that we saw helpless under the knee of his tormentor, looked nothing like his story. Today, we must remind ourselves to show each other the humanity and respect to tell our stories and live with the human dignity that provides room for all to share equally in all that the world has to offer.