The Politicization of the Supreme Court 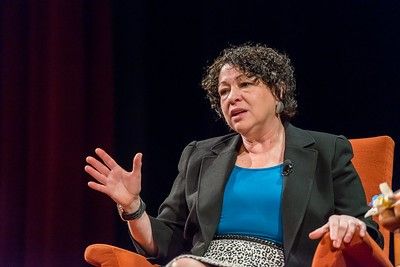 After the Supreme Court heard arguments last week about the Mississippi abortion law challenging Roe v. Wade, liberals in America seemed to give up, assuming that, after fifty years, Roe v. Wade will soon no longer be the law of the land. A decision will not be made for six months, but the language of the conservative justices convinced most news commentators and their various guests—and most liberal Americans—that the matter is all but decided. Justice Sonia Sotomayor summed up the despair of many liberals in a statement that will go down in history as a defining observation about the future of the Court: “Will this institution survive the stench that this creates in the public perception that the Constitution and its reading are just political acts? I don’t see how it is possible.”

Sotomayor’s emotion is clear when she associates the anticipated action by the Court with a bad odor. What about her logic? Is she justified in making the claim that the Court is no longer performing judicial acts, but rather acting out of political motivation?

This is a perfect example of how I try to illustrate to my students how to read data and what logical conclusions can be drawn from numbers.

It is a fact that over the last 35 years, there have been a number of justices confirmed by a unanimous vote or near unanimous vote, which means that both political parties were in agreement while supporting their nomination: Sandra Day O’Connor, confirmed 99-0; Antonin Scalia, confirmed 98-0; Anthony M. Kennedy, confirmed 97-0; David H. Souter, confirmed 90-9; Ruth Bader Ginsburg, confirmed 96-3; Stephen G. Breyer, confirmed 87-9.

It is also a fact that with the three justices confirmed to the court during Donald Trump’s term in office, the vote broke down along party lines with rare exceptions. In the case of Amy Coney Barrett, all Republicans voted for Barrett with the exception of Susan Collins, and all Democrats voted against her confirmation, with Independents siding with the Democrats. The same was the case with Brett Kavanaugh, with the single exception in his case being Democrat Manchin from West Virginia voting with the Republicans. The same with Neil Gorsuch, with two other Democrats joining Manchin in voting with Republicans.

Prior to Trump’s term in office, there had certainly been times that the vote for or against confirmation broke down along party lines, including in the case of Sotomayor’s own confirmation. Never, however, had it been so blatant that one issue determined who was placed in nomination and how the vote went. Trump made clear that he would place only anti-abortion justices on the Court. Unlike the earlier unanimous and near-unanimous decisions based on the belief that a justice would uphold the law of the land, we are left with a court that many see as having been handpicked to uphold the will of a minority of Americans on one issue.

And how does this problem get resolved since Supreme Court justices serve for life? Is our justice system irrevocably broken?

The Founding Fathers did not foresee justices being confirmed to the court for political reasons and deciding cases based on their own moral codes rather than on the Constitution. There is discussion about restructuring the court, increasing the number of justices to overcome the entrenched bias toward the conservative. That in itself might be seen as a partisan political move, but short of change in conscience on the part of today’s politicians, it may be the only way to return the Court to the state of integrity that Sotomayor sees it as so tragically lacking.