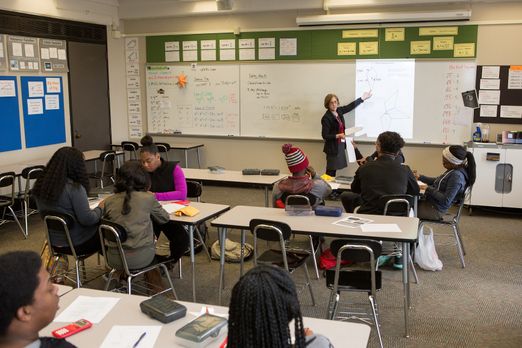 May seems like a very good month to celebrate teachers, as the school year draws to an end and award and commencement ceremonies blossom. For ten years now, the month has been marked so by the Academy for Teachers in New York City, an organization whose mission is “to honor and support teachers through world-class learning experiences that inspire them to continue changing lives, in the classroom and beyond.” Started by author Sam Swope, the Academy offers “master classes” to teachers from New York schools, the first of which occurred on May 31, 2012, when Professor James Shapiro of Columbia led a college-like seminar on Hamlet. As Swope described it

Shapiro, a world-class scholar who’s been living and breathing Shakespeare for decades, started with the play’s first lines: “Who’s there!” “Nay, answer me; stand, and unfold yourself!” “Long live the king!” Time stopped for the teachers. An hour later, they were still only a few lines in. Everyone needs their minds blown from time to time. Teachers more than most.

Swope and master class teachers like Rinne Groff, Billy Collins, Henry Louis Gates Jr., Gail Collins, Ta-Nehisi Coates, Jill Lepore, and lots and lots of others have been blowing minds and celebrating teachers ever since.

This year, for the first time, I was able to attend the annual “Show Teachers the Love!” celebration, held on May 9 at the New York Historical Society. In this year of ongoing division and seemingly eternal COVID, this was the perfect antidote: an evening that saluted teachers everywhere, and especially those associated with the Academy and with their new Early Career Fellows program. Over its ten years, the Academy has hosted 300+ master classes for 3,000 teachers from 600 public, charter, and private schools, who collectively teach 30,000 kids every year. I’d say that’s pretty impressive.

The evening’s gala kicked off with music by The Scooches and was emceed by comedian Bonnie McFarlane, who introduced us to a performance by Rosie’s Theater Kids, dance by Yin Yue, tap by Ayodele Casel (I could hardly stay in my seat for that one!), music from Harp & Plow, and a reading by John Turturro of the Academy’s 2022 “Stories Out of School” Flash Fiction Contest winner, “Sunshower,” by Australian teacher Josephine Sarvaas. (You can read this fabulous “story out of school,” which was published in A Public Space, here.)

For me, however, the highlight of the evening was playwright Jeremy O. Harris’s presentation of the Woodridge Award for Great Teachers to his high school English and drama teacher, Candace Owen-Williams. Harris, whose highly acclaimed Slave Play garnered numerous Tony nominations, spoke at length about growing up as a tall, skinny, queer Black kid in a small, deeply conservative town in Virginia, about the bullying and harassment, about feeling unseen and unheard, not to mention unappreciated. Except that his English teacher, Mrs. Owen-Williams, stayed after school to listen to and encourage him, to nurture his obvious talents, to help him mount a production of The Laramie Project at their school (she had also been Matthew Shepard’s teacher. . .), to pursue college, and especially to pursue his dreams.

The audience, hushed and rapt, listened hard and then burst into lengthy applause when the award was presented, and kept cheering, and cheering, as teacher and former student shared the moment. It is one I will not soon forget.

Is there a teacher who inspired and supported you? And what of those students you have inspired and supported? Who would you like to give an Award for Great Teachers to? As this month of May progresses, I am thinking of so many great teachers I have learned from. I want to thank and to honor them all.