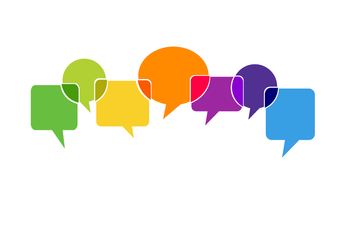 It occurred to me while writing my last blog and thinking of quite something else, just how much the experience of popular culture is a shared one. Since I didn't want to go off on a tangent—especially within the confines of a 500-word or so mini-essay—I decided to mention the fact but to save it for another time. And this blog seems as good a time as any. So, here goes.

One of the more, one might say, notorious illustrations of the shared nature of popular culture is the laugh track. Developed in the early years of television, the laugh track was created to compensate for the physically unshared nature of solitary TV viewing. Until the advent of electronic technology, comedy had always been something that was performed live, and so was able to take advantage of the way that laughter, by and large, is a social phenomenon. Yes, one can laugh out loud, as they say, all by oneself, but generally we don't. Just consider the difference between seeing someone alone on a sidewalk laughing hilariously, and seeing a group of people laughing together. You know which instance looks like fun and which looks like something to avoid. And so did the pioneers of television comedy, especially situation comedy, who accordingly threw in all those annoying laugh tracks to get TV viewers laughing along.

Then there is what I'll call the "water cooler" dimension of a shared popular culture, the gathering together of office workers—and non-office workers, too—to talk about last night's prime-time favorites or the latest "must see" movie. At this level, sharing goes beyond, well, mere sharing, to something rather less benign—to something, in fact, a lot more like keeping up with the Joneses (or Kardashians?!). For being able to join the talk about whatever is hot in popular culture promotes one's own personal status in the group, while being at a loss constitutes a certain loss of face. In this respect, the status-conserving effect of the water cooler conversation echoes the purpose of what Pierre Bourdieu called "cultural capital," but in a completely different direction. Because for Bourdieu, cultural capital constituted the knowledge of the high arts that high status individuals could display in order to demonstrate their high status in public—as the sons (but not daughters) of the English upper classes were once taught Latin and Greek in their childhoods, enabling them to pull out a volume of Homer in a carriage or on a train and thus distinguish themselves from the, um, hoi polloi.

Of course, with the explosive rise of social media, no one really needs a water cooler anymore to share the latest in pop cultural capital (what would Game of Thrones have been without social media, or American Idol?). Indeed, with the well-nigh infinite number of possibilities for sharing that the Internet provides, it is hardly surprising that experience itself has become something that must be shared in order to be fully experienced. Facebook can probably be given the credit for inaugurating this ultimate turn away from American self-reliance to full-on social heterodirectedness (well, maybe MySpace, but who remembers MySpace?), but, as I have written in an earlier blog, we now have Instagram (yes, bought by Facebook a long time ago), which impels people to do all sorts of things (some of them rather deadly) just to share them with others (pics or it didn't happen!).

Which takes me to the point of this blog, which is that popular culture is forever shaping the way we live, think, and even speak. Just consider how the shared nature of popular culture has become so intense in the digital era that it has come to affect our language in environments that would not seem to have anything to do with popular culture at all. For example, when I read the minutes of various committees at my university, I note that no one ever "reports" anything anymore, or "presents," or even "says." Everyone "shares"—a linguistic turn that is related to the replacement of the verb "contact" by the much more emotionally intimate expression "reach out," as in "I'll reach out to the chair of the English department to see whether their assessment report has been sent to my office yet."

Or should I have said "shared"?

What We've Learned: The Shared Language of a Handbook