Rock Music and the Populist Right

It's a long way from "Helter Skelter" to "Back Off Boogaloo," but in the wake of the recent attack on the U.S. Capitol and the looming danger of more such assaults to come*, I find myself thinking about the role of rock-and-roll in the current right-wing/populist insurgency. For while the semiotic significance of the situation may appear to be disconcertedly paradoxical, it merits some serious attention as we face a menacing future. 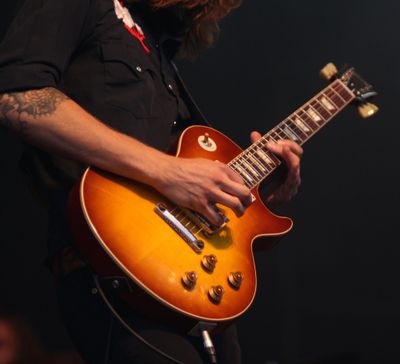 Of course, neither Paul McCartney—whose whimsical exercise in down-and-dirty rock would become the Manson Family theme song—nor Ringo Starr—whose possible** jab at Paul McCartney has been transmogrified into a code name for a white-supremacist uprising—could ever have imagined that their music would inspire maniacal violence. But then, Bob Dylan didn't mean to provide the Weathermen with their nom de guerre, either. The point is that rock-and-roll has a history of flirting with defiance, with revolution, and even with violence.

This flirtation became engrained in the rock ethos in the 1960s when the Rolling Stones, seeking to distinguish themselves from Epstein's adorable mop tops, decided to become the bad asses of the British Invasion. But their pose as tough guys ("Play with Fire"), revolutionaries ("Street Fighting Man"), and Satanists ("Sympathy for the Devil"), made them icons of the Cultural Revolution, not fascism. How disconcerting it must be for them today to find that "Play With Fire" and "Sympathy for the Devil" are part of the Spotify playlist for Trump rallies***—along with Neil Young's "Rockin' in the Free World," John Fogarty's "Fortunate Son," Michael Jackson's "Beat It," and The Village People's "Macho Man."

Just how the much-celebrated "attitude" of rock, its theatricalized opposition to the establishment, law-and-order, and any form of authority, came to be appropriated by the alt-right—the Boogaloo Boys and their ilk, with their fantasies of a "Boogaloo" uprising against everyone to the left of Donald Trump—is one of the paradoxes of popular cultural history. But there you have it: rock-and-roll, in its doddering (if not toothless) old age, is showing up in a new revolution, with classic tracks joining the obscure underground of Nazi Punk and National Socialist black metal as the playlist for a violent overthrow of society.

But then, perhaps it isn't so paradoxical. For when rock-and-roll began to play with the fire of revolution, it opened the door to violence, and violence comes in all flavors. Even John Lennon was worried about the consequences, voicing his concerns in his notoriously ambiguous (if not ambivalent) anthem "Revolution" in an apparent effort to put the brakes on something for which he seems to have felt some responsibility.

I'm reminded by all this of Horkheimer and Adorno's bitter condemnation of the movie industry in their Dialectic of Enlightenment—their insistence that, due to the appropriation of the cinema by European fascism, the movies themselves were politically suspect. But that, I think, went too far. The medium is not the message here. Rather, the message is that nothing can be taken for granted. Things can be turned upside down. The rock-and-roll revolution can swing right just as well as it can swing left, and, sometimes, lawful authority can be our friend. Because as we anxiously await a presidential inauguration fraught with menace and foreboding, we cannot escape the irony that we (I am using this pronoun to include everyone who wants to see Joe Biden and Kamala Harris safely inaugurated) must rely now on some of the most traditional agents of armed authority in the playbook—the police, the National Guard, and (who knows?) the Army (not to mention the Constitution and the Supreme Court)—to protect our liberties.

And that's not rock-and-roll.

Photo Credit: "Guitar" by blondinrikard is licensed under CC BY 2.0

Here are three footnotes that didn't make it into the text:

* This blog is being written on January 14.

** Opinions differ on this.

*** Or so it has been concluded on Gizmodo.

About the Author
Jack Solomon is Professor Emeritus of English at California State University, Northridge, where he taught literature, critical theory and history, and popular cultural semiotics, and directed the Office of Academic Assessment and Program Review. He is often interviewed by the California media for analysis of current events and trends. He is co-author, with Sonia Maasik, of Signs of Life in the U.S.A.: Readings on Popular Culture for Writers, and California Dreams and Realities: Readings for Critical Thinkers and Writers, and is also the author of The Signs of Our Time, an introductory text to popular cultural semiotics, and Discourse and Reference in the Nuclear Age, a critique of poststructural semiotics that proposes an alternative semiotic paradigm.
Labels