In Praise of Writing Centers 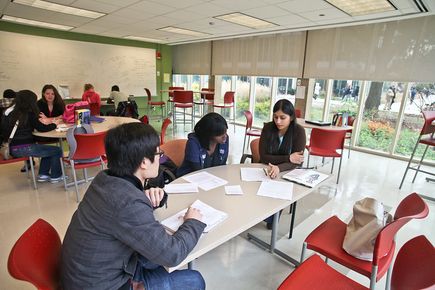 Last week, Stanford’s Hume Center for Writing and Speaking celebrated its twentieth anniversary, giving me a chance to reflect on not only this writing center that I had the great privilege of founding but also on all writing centers.

I remember so well arriving at Stanford in 2000 and realizing that the university did not have a writing center, though they had at one point had a very small program developed and sustained by graduate students. So Marvin Diogenes and I began advocating for such a center, arguing that we could not in good conscience implement the rhetorical curriculum we had in mind without that kind of support available to all students. I was used to proposing such things—and often being ignored. But to my delight, just about six months after my arrival, I got a call from the Vice Provost’s office asking if I could put together a proposal for a writing center since a potential donor had “expressed interest.” Could I ever! Marvin and I went into high gear, and in just a few months we had not only a proposal but a design for an on-campus center. The donors (George and Leslie Hume, for whom the Center was later named) came through and the University stepped up as well to fund the Center, which opened in fall 2001.

Before the opening night, we took out a full-page ad in the campus newspaper: “Announcing a New Stanford Tradition: The Stanford Writing Center.” At the opening, the president, provost, and all the deans were present, several of them giving brief statements about the key importance of writing. And when we opened for business, we were almost overwhelmed by the numbers of students who turned up for workshops—and for tutorials. And for so much more. Soon we were sponsoring “writer’s nights,” at which students performed their writing (and during parents’ weekend performed writing with a parent!); “How I Write” events, at which professors and administrators (including our president) were interviewed about their writing practices and processes; dissertation “boot camps” that attracted more grad students than we could easily accommodate; and outreach programs to local schools. As I have often said, it was the most fun I have had in my very long career. (You can see a brief video about this history on the Center’s website here.)

Now twenty years old, the Center has grown exponentially, occupies a small building of its own, and is brilliantly directed by Zandra Jordan, who received her BA from Spelman, her MA from Brown, and her Ph.D. from the University of Michigan; who specializes in womanist ethics, racial justice, and writing center administration; and who serves as a Chaplain Affiliate with the Office of Spiritual and Religious Life. Under Dr. Jordan’s leadership, the Center has expanded its offerings as well as its cadre of amazing tutors, who focus on writing, on speaking, and on multimedia performances.

As I have traveled this country from coast to coast, Alaska to Florida, Southern California to Maine, I have seen writing centers at work, and I have been amazed at the ingenuity and perseverance of the faculty and students who work in them, often against tremendous odds and without anything like the kind of support that I found at Stanford. And I celebrate every one of these centers, with their focus on collaboration, on the social nature of writing and speaking, and on the ways in which writers and speakers can help one another. Every single day. And in so many ways.

As we move slowly, slowly out of the worst of the pandemic, we need writing centers more than ever, places that will once again be there to support students in giving voice to their goals and dreams. I am so very, very grateful for writing centers, now and always!