Not having any children nor much of anything to do with Christmas, I must confess that I had never heard of the Elf on a Shelf toy (and book) until I read an article on it in the Washington Post this morning.  The article was actually less on the toy than on a cultural interpretation of it recently published by Laura Pinto and Selena Nemorin, both of whom rather left themselves open to a certain amount of mass media ribbing by describing the toy as “'a capillary form of power that normalizes the voluntary surrender of privacy, teaching young people to blindly accept panoptic surveillance and'” [deep breath] “'reify hegemonic power'” (bracketed remark courtesy of the Post reporter, Peter Holley).

That doesn't mean that I don't agree with Pinto and Nemorin wholeheartedly, however; I'd just put things a little differently—as follows. 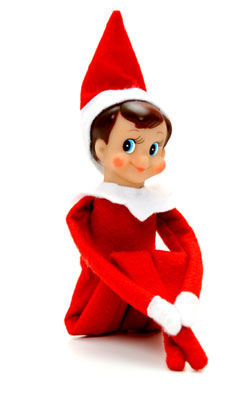 Should you be, as I have been heretofore, somewhat in the dark about the Elf on the Shelf phenomenon, here's the background: the Elf on the Shelf is the creation of Chanda Bell, who self-published a children's book in 2005 about the way that Santa Claus keeps track of all the world's naughty and nice children by assigning "scout elves" to monitor them in their households, who then report back to "the boss" on who deserves a nice Christmas, and who doesn't (I'm holding myself back here from digressing into a lecture on how this Santa Claus/Elf/North Pole business got imported into a religious celebration which originated in the snowless and elfless Middle East.)  The book (which has reportedly sold some six million copies) is sold along with various elf dolls that parents are instructed to secrete around the house in a sort of treasure hunt for their children, who are instructed to try to find the little spies (who are held harmless from the traditional fate of the spy-caught-in-the-act by the rules that govern the game).

The whole thing, of course, is a rather clever (and hugely profitable) riff on that old Christmas standard that has been telling children that Santa Claus has been "making a list/and checking it twice" for generations.  And that is the way that everyone but us dastardly cultural analysts has responded to it.

But as I say again and again in these blogs, the meaning of a cultural signifier depends not upon itself but upon the system (or historical context) in which it appears.  And at a time when the cultural system includes everything from NSA surveillance to Facebook/Google data mining to iPhone-to-YouTube video feeds, this harmless little toy becomes a sign—a sign, as Pinto and Nemorin put it, of a society that has become a vast Panopticon, the word that the late Michel Foucault adapted from Jeremy Bentham to describe a place where everyone is under constant surveillance.

The only place in which I would depart from Pinto's and Nemorin's take on this signifier is their focus on top-down, "hegemonic," surveillance.  Not that such a Panopticon doesn't exist (of course it does), but that isn't where the really striking significance lies here.  The really striking significance lies in the difference (remember, a semiotic system is always one of associations and differences) between the way that people today appear to be responding to this "game of spies" and the way they would have responded to such a toy in the 1960s.  Because, fresh from the trauma of an era when Americans actually were encouraged to spy on each other in real life in order to smoke out "Commies," children and adults alike in the 1960s would most likely have found the whole thing to be unbelievably creepy.  This was, after all, the era that made distrust of governmental authority (from both ends of the political spectrum) a national pastime; and it was also the era when "the generation gap" became one of the most commonly uttered phrases of the day.  It was not a time when children would have happily played a game that invited constant parental surveillance of their every move.

And that is where the significance of all this lies for me. People (children and adults alike) have become so accustomed to having their entire lives on digital display—whether through the active uploading of their every thought and experience to social media, or through such passive agencies as data mining, surreptitious digital recordings, and so on and so forth—that the idea of an elf spy game comes across as charmingly traditional.  So this isn't simply a matter of hegemony run amok: it's the voluntary surrender of a right to privacy that perhaps only folks as old as I am value any longer.

And so, elflessly yours, until next semester's Bits bits.