At that time it seemed like a good decision to dive straight into my undergraduate degree two months after moving halfway across the world, but one semester into my college experience, I realized I had not given myself enough time to prepare myself for true American college.

At that time it seemed like a good decision to dive straight into my undergraduate degree two months after moving halfway across the world, but one semester into my college experience, I realized I had not given myself enough time to prepare myself for true American college.

As someone who immigrated from Pakistan and landed straight in the heart of the American midwest, I thought I knew enough about the lives and interactions of college students here to be able to smoothly adapt to this new way of life. However, no amount of dark academia novels set in prestigious liberal arts colleges or reality shows featuring kids my age could prepare me for real American college.

If my sophomore self could ever draw up a list of cultural/social differences I was faced with (things that both shocked, or pleasantly surprised me)—to help my freshman self navigate through college easily—these four items would definitely make it to the list:

As someone who knows many foreigners, immigrants, or people living in the US who were raised in another country, one thing that always shocks all of these groups is the lack of a formal language. Now this one might be something that is brought up far more by my foreign-raised peers belonging to an Asian culture, but the lack of an entirely different set of words reserved to talk to people who are either older than you or more experienced than you (in whatever field you belong to) makes conversation difficult rather than easier for us. In a college setting, talking to your professor the same way you’d talk to your fellow classmates can make navigating through casual conversations harder, at least it did for me.

While this part of American culture/language was something I was already familiar with, I found it extremely difficult to have to use just a formal tone rather than a formal language in my classes.

2. Individualism has its pros and cons

One thing I was most excited about when I started college was how people focused on themselves, and it wasn’t even frowned upon! Back home, the sense of community is so strong that every decision you make and every path you chose had to be discussed with or approved by the members of your community (be it your extended family, friends, or even your neighbors). Now don’t get me wrong, I absolutely love this aspect of my culture. Every member of the community has strong bonds with each other and they’re always ready to support you in whatever decision you make. But to live on your own, making mistakes of your own, and having to deal with the consequences on your own seemed like a great proposition. It was, for the first four months. After those four months, I realized I was craving the very thing I thought was going to suffocate me. Suddenly, friends who had chosen to move to another country (to study or work or find themselves) coming home every chance they could, started making a lot more sense. With time, you get used to it and begin feeling exceedingly grateful for the chance to grow on your own.

I would never admit it to anyone but I feel like my past self deserves to know that  finding yourself in college often means coming home and eating alone out of a styrofoam box and feeling the loneliest you’ve ever been.

3. You’re already halfway into your career as a college student

I don’t blame freshman me for being too overwhelmed with the entire move from Pakistan to the US, but if I could go back and tell her to do one thing differently, it would be to use all the opportunities and support provided by my university that would be useful after graduation. Attend networking events, learn more about approaching potential employers/mentors and explore more. College back home was more about academics rather than experience so I–like many other international students/new immigrant students—wasn’t expecting anything more than four years of only writing essays or giving presentations.

4. Like most things in media, college too is romanticized

As someone whose perception of college was based entirely on whatever the American movies/TV shows put out there, it shouldn’t have been shocking that college was not all about brunch with friends, parties, and spring breaks in South America.

As someone moving to a place they’d never been before, it did come as a shock when college in America was still about finals and due dates and messed-up sleep schedules. Sure, American college is different from college back home, but it still is college. 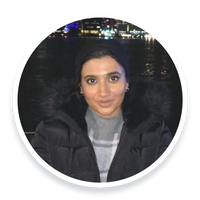 Samia Saeed is a current Marketing and Journalism student at the University of Wisconsin - Milwaukee. On the weekends, you’ll find her holed up in her room, either watching her comfort Ghibli film or reading her favorite immigrant-fiction book.