The Effects of Alcohol on the Developing Brain

You’ve had a long day at work or school. You woke up early, headed off to work, got chewed out by your boss despite doing your best, and went home. Most people in this situation might reach for the wine bottle.

The cultural trope is the hard-working father coming home to drink a few beers or the tired business woman pouring herself a “well-deserved” glass of red wine.

Drinking has become a social event, with bottles of wine appearing at weddings, social gatherings, and nearly every big holiday. Maybe it’s part of your coping mechanism. Maybe you simply enjoy it. Regardless, most everyone will view alcohol in moderate quantities as a harmless substance that can take the edge off when life knocks you astray.

For the most part, this is true. One glass a week isn’t going to send you to the emergency room. But alcohol abuse can lead to a host of brain issues, starting with cognitive decline.

Our brains don’t quite “bounce back” as quickly from something serious, and it takes more time and cellular energy for older people’s brains to perform as efficiently as their younger counterparts. When you add heavy drinking on top of that, the situation starts to get  sticky. This very well-cited study found decreased white matter tracts in older chronic alcoholics.

Let me break that down for you.

After looking at brains of 49 veterans who consumed a lot of alcohol daily, the researchers found that, compared to healthy control participants, the alcoholic group had significantly fewer brain cell connections. This means that different parts of their brains weren’t talking to each other as much. And that’s the most crucial step to getting anything done.

Surprise! Communication is key, even inside our bodies.

These same researchers also found higher cortical cerebrospinal fluid and diminished cortical gray matter in the veterans group. In other words, this group had more fluid in their brains, and less of their brain cavity (the space in their heads) was actual neural tissue. Basically, the alcoholics had more water and less brain in their heads.

What about other parts of the brain? Glad you asked!

There’s a small but incredibly important area responsible for memory called the hippocampus. This little seahorse-shaped bundle of tissue is responsible for anything from remembering how your mother used to read bedtime stories to you to learning how to drive. Unfortunately, it’s hurt by age and alcohol speeds up that effect. Some researchers from Stanford used a technique called MRI, which is basically a giant magnet that lets scientists see the inside of someone’s brain, and found less hippocampal volume in alcoholics, a correlation which intensified with age.

Heavy drinking can also affect long-term memory, causing something known as alcohol-related dementia (ARD). This is similar to the dementia or cognitive decline generally associated with aging, but on a much deeper level. ARD is scarier because the effects are continuous, meaning all the symptoms will keep happening even after someone has sobered up.

People with ARD can also develop something called Marchiafava-Bignami Disease (MBD), which is pretty much one of the “big bad bosses” of alcohol disorders. MBD causes short or long-term coma in its patients (simply put, a long and dangerous nap), as well as changes in memory, personality, perception, and attention. Like the veteran study, MBD patients have a decreased white matter – the connections in the brain that allow one part of the brain to “talk” to another.

In MBD, the lack of communication is much worse because patients lose their corpus callosum, a huge bundle of fibers that connects the two halves of the brain. Without this, whatever your brain is doing on the left side can’t translate to whatever your brain does on the right side. Consider the example of Country A and Country B. Country A makes ingredients, Country B makes pies, and the only way to get from Country A to B is a huge bridge. It would be a real disaster for all the pie-lovers of the world if that bridge were severed. That’s exactly what it’s like for MBD patients.

Even without MBD and the erosion of the hypothetical “bridge”, extreme alcohol intake can slowly destroy the connections in your brain, which is why it’s important to be careful with over drinking. 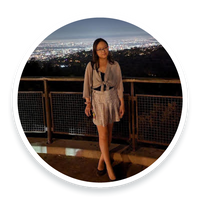 Allie Yuxin Lin is a senior at Columbia University in New York studying psychology and neuroscience. As an East Coast native, she is very confused about the lack of cold weather in LA (but hey, no complaints!). If she isn’t writing something up or researching the newest neuroscience discovery, she’s probably running around the streets with her Australian Shepherd, Jasper.