How to Predict and Reduce Gun Homicides

With 45,000+ annual U.S. firearm deaths (123 per day, from homicide, suicide, and accidents), America has a gun problem, of which the recent Buffalo, Uvalde, and Highland Park mass killings are horrific examples.

In response, we often hear that the problem is not America’s 400 million guns but its people. “We have a serious problem involving families, involving drugs, involving mental health in this country,” asserted Colorado congressional representative Ken Buck. “We have become a less safe society generally. Blaming the gun for what’s happening in America is small-minded.”

To protect against mass killings by 18-year-olds, as in Buffalo and Uvalde, we are told that we don’t need to match the minimum age for assault rifle purchase, still 18 after the new gun safety act, with the age for beer purchase, 21. We don’t need to train and license gun owners as we do drivers. We don’t need safe-storage laws or restrictions on large-capacity magazines. Instead, we need to fix the problem perceived by Texas Governor Greg Abbott and National Rifle Association chief executive Wayne LaPierre: evil people. To solve the gun violence problem, we need better people, enabled by commendable social changes: more married fathers, less pornography, fewer violent video games.

And most importantly, we’re told, we need to deal with mass killers’ mental sickness. “People with mental illness are getting guns and committing these mass shootings,” observed former U.S. Speaker of the House Paul Ryan. While president, Donald Trump agreed: “When you have some person like this, you can bring them into a mental institution.” Mass killers, he later added, are “mentally ill monsters.”

However, reality intrudes. As I documented in an earlier essay,

As much as we psychologists might appreciate the ostensible high regard, today’s psychological science lacks the presumed powers of discernment. 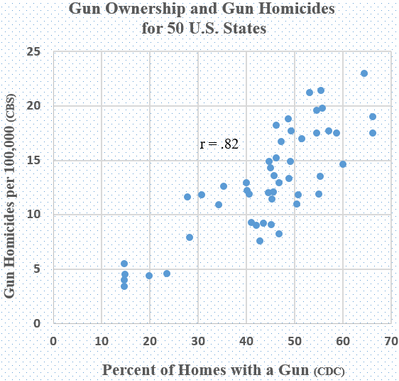 Of these three predictor variables, gun policy is one that, without constraining hunters’ rights, society can manage with some success: When nations restrict gun access, the result has been fewer guns in civilian hands, which enables fewer impulsive gun uses and fewer planned mass shootings.

Many people nevertheless believe that, as Senator Ted Cruz surmised after the Uvalde shooting, “What stops arms bad guys is armed good guys.” Never mind that in one analysis of 433 active shooter attacks on multiple people—armed lay citizens took out active shooters in only 12 instances. Many more—a fourth of such attacks—ended in a shooter suicide.

Moreover, if the answer to bad guys with guns is to equip more good guys with guns, then why are states with more armed good guys more homicidal? What explains the state-by-state guns/homicide correlation? Are the more murderous Alaskans (and Alabamians and Louisianans) really more “evil” or “mentally ill”?

Or is human nature essentially the same across the states, with the pertinent difference being the weapons?

(For David Myers’ other essays on psychological science and everyday life, visit TalkPsych.com. Follow him on Twitter: @davidgmyers.)