Have you ever, amid a group, found yourself caught up in something larger than yourself? Perhaps with other fans at a game? At worship? At a rock concert? With your emotions aroused and your self-awareness diminished, did you feel at one with the surrounding others? Did you experience what we social psychologists call deindividuation?

In group situations, arousal + anonymity can power mob cruelty or vandalism, as in the January 6, 2021, attack on the U.S. Capitol. As one rioter lamented afterward, “I got caught up in the moment.”

In other settings, socially produced arousal and loss of self enable moral elevation—a prosocial feeling of warmth and an expansion of self that bonds us to others. In Collective Effervescence, filmmaker Richard Sergay illustrates how diverse people in polarized cultures can bridge societal rifts and experience spiritual transcendence through singing.

His 13-minute video, produced for the Templeton World Charity Foundation, focuses on Koolulam, an Israel-based “social-musical initiative centering around mass singing events.” In one such event, a thousand Jews, Christians, and Muslims gathered at midnight after the final day of Ramadan. Their mission: to learn and sing—in Hebrew, Arabic, and English, and in three-part harmony—Bob Marley’s “One Love.” 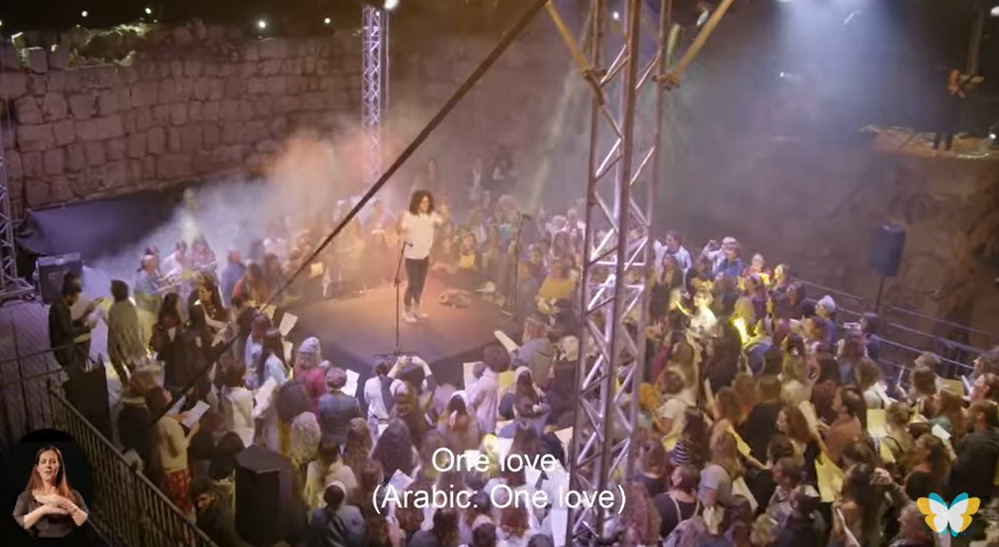 Collective effervescence, so named by sociologist Emile Durkheim, engages group members in a self-transcending experience. When experiencing such behavioral and emotional synchrony, people not only feel at one with others, notes psychologist Shira Gabriel and her colleagues, they also, afterward, feel less stressed and depressed, and more purposeful.

As strangers make music together, social psychological phenomena operate. These include not only the diminished self-awareness and lessened restraint that marks deindividuation, but also the reconciling power of realizing a superordinate (shared) goal. Moreover, the collective synchrony of bodies and voices engages embodied cognition—our bodily states influencing our mental states. With bodies and voices collectively forming one choral voice, participants’ emotions converge. Synchronized voices create, at least in the moment, harmonized spirits.

Even synchronous physical movements—such as walking together—facilitates conflict resolution, report psychologists Christine Webb, Maya Rossignac-Milon, and E. Tory Higgins. As walkers coordinate their steps, mutual rapport and empathy increase. The boundary between self and other softens.

In some contexts, the embodied cognition experience is enhanced by combining collective singing and physical movements. “In the Western Isles of Scotland,” Scottish composer John Bell tells me, “there are tunes called ‘waulking-songs.’ These were sung as accompaniments to physical work, particularly spinning, weaving and waulking” (stretching and fluffing tweed fibers), much like sea shanty songs used by sailing ship crew members to focus and coordinate their efforts.

In sub-Saharan Africa, music likewise connects voice with movement. Singing, Bell observes, is a full-bodied experience. “In South Africa, some of the ‘freedom songs’ now popular in the West, such as ‘We Are Marching in the Light of God,’ were sung by people carrying the coffins of their colleagues killed by the apartheid regime. When you look at videos of demonstrations during these years, there is a clear synchronicity between the song of the people and their physical movement. The one enables the other.”

Singing the rhythmic “We Are Marching in the Light of God” (“Siyahamba” in Zulu) begs for movement, as illustrated by this Los Angeles community choir and this African Children’s choir. In the American folk tradition, Sacred Harp (a.k.a. “shape note”) music is similarly participant-centered and embodied—with a cappella singers facing one another around a hollow square, and each co-leading with hand motions, as here.

So, psychological science helps explain the collective effervescence created by Koolulam events, and by other collective synchronous behaviors, from group singing to line dancing. When we synchronize our bodies and voices, we harmonize our spirits.

(For David Myers’ other essays on psychological science and everyday life, visit TalkPsych.com or his new essay collection, How Do We Know Ourselves: Curiosities and Marvels of the Human Mind. Follow him on Twitter: @davidgmyers.)