Reduce risk of early death by eating more plants? The evidence continues to mount in support of a plant-forward eating style for health and longevity. In another study released this month in the Journal of the American Medical Association, researchers asked the question “Is there an association between Dietary Guidelines for Americans (DGA) recommended dietary patterns with total and cause-specific mortality?” Results indicated that greater adherence to any of four plant-forward eating plans reduced risk of early death (reported to be by as much as 20%) and death from several chronic diseases. https://pubmed.ncbi.nlm.nih.gov/36622660/ As one of the largest and longest running cohort studies, the research included over 75,000 women and over 44,000 men with data collected over an almost 40-year span. The four eating plans included the Mediterranean diet (no surprise!) along with the DASH diet (see my previous post), semi-vegetarian (think plant-based Flexitarian), and a healthful plant-based diet, that minimizes animal foods and alcohol. All four plans focused on more whole grains, vegetables, fruits, nuts, beans, and legumes – and all align with the DGA. Researchers said that the study suggests that there is no one “diet” and that people can create their own eating plans based on food preferences, culture, and health concerns. https://www.cnn.com/.../live-longer-diet-wellness/index.html Read more about diet's role in longevity and disease risk reduction in Spotlight G Nutrition and the Aging Adult in Nutrition for a Changing World! 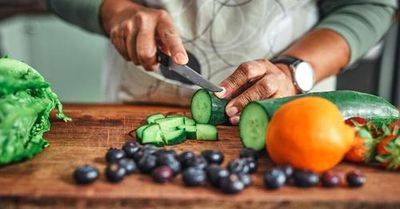 About the Author
Jamie Pope, a Registered Dietitian Nutritionist and Assistant Professor of Practice in Medicine, Health and Society at Vanderbilt University, has worked in the areas of obesity research, health promotion, heart disease prevention, and since 2000 teaching introductory nutrition. Beyond the classroom, she adapted portions of her nutrition courses to produce a Massive Open Online Course attracting more than 175,000 participants from around the world. This experience earned Jamie an Innovation in Teaching award from the Vanderbilt University School of Nursing. She is the co-author of the textbook entitled Nutrition for a Changing World. Now in its second edition, the text is in use in over 140 universities across the U.S. and the recipient of a 2020 Textbook Excellence Award. Most recently she developed and produced an audio course for Learn25.com (Nutrition 101: Understanding the Science and Practice of Eating Well) that is also featured on platforms like Apple Books and Audible. Jamie holds a Master’s of Science degree in Nutrition and post graduate work in Health Psychology. She is a Fellow of the Academy of Nutrition and Dietetics. She has authored or contributed to numerous scientific and popular press publications. Jamie also held several corporate positions, serving as nutrition consultant and media representative.
Topics