Reconsidering the Value of Education: Why Furthering Your Education is Critical

The number of students who decide to attend college has ebbed and flowed over time. In May 2022, the National Center for Education Statistics reported that total undergraduate enrollment decreased by 9 percent from fall 2009 to fall 2020 (from 17.5 million to 15.9 million students.) The declining numbers have many questioning whether or not students see value in having a college education.

So, is earning a degree relevant? Is it necessary? Is the sky falling for higher education? While the chicken littles within the education ecosystem would have us believe we should take cover, the reality is a bit more complicated. Though enrollment is down, data from a recent New America survey shows that 75 percent of Americans believe education beyond high school offers a good return on investment. 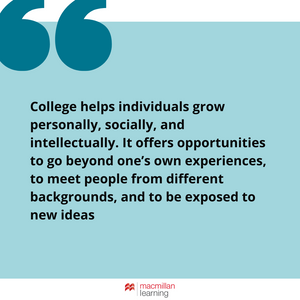 Brian Powell, Department of Sociology Professor at Indiana University, and UCLA Professor Natasha Quadlin have conducted national surveys of public views regarding college which overwhelmingly demonstrate that the American public sees a college degree as important. “The majority of Americans believe that a college education today is more important than it was a decade ago,” Powell said.

Students have to weigh the cost of college and investment they’ll need to make against the value they believe they will take away from it. So while the costs are higher than ever, and the gig economy has incentivized entrepreneurship, a college education is still viewed by most as a doorway to future success.

The Data & the Value

Having a postsecondary education has long been associated with better economic outcomes, like lower unemployment rates and increased earnings. According to Powell, going to college is more relevant than ever. The median annual income for college graduates was $61,100, almost double of those whose highest level of education was high school. “The income difference between a high school graduate and a college graduate is huge and continues to grow,” he noted.

The economic differences remained true during the pandemic. Employment was 86% for college graduates, 75% for those with some college and 68% for those who completed high school or the equivalent for 25- to 34-year-olds. College graduates also fared better during the pandemic. Those without a degree were more likely to work in settings that didn’t offer benefits like telecommuting and in industries that were disproportionately impacted, like service and retail.

While having a college degree is associated with higher income and more employment opportunities, a benefit of a degree extends well beyond that. “College helps individuals grow personally, socially, and intellectually. It offers opportunities to go beyond one’s own experiences, to meet people from different backgrounds, and to be exposed to new ideas,” said Powell.

The “Crisis of Meaning” for Higher Ed and Possible Solutions 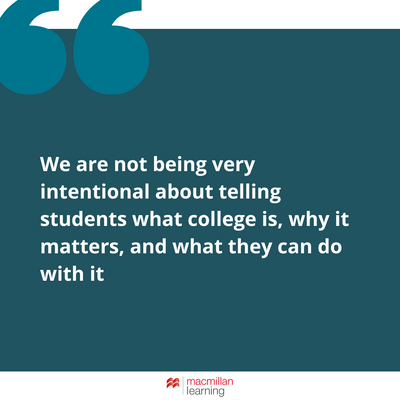 While there are several barriers to students both deciding to get a college degree and completing it, there are solutions that can be implemented by both instructors and institutions to create a better understanding of why continuing education can help students in the long run. “College has a crisis of meaning that we must address directly with students,” said Matthew Sanders, Executive Associate Dean, College of Humanities and Social Science and Professor of Communication Studies at Utah State University. “We are not being very intentional about telling students what college is, why it matters, and what they can do with it,” he said.

The more valuable, relevant, and applicable the knowledge students acquire, the more their college degree is worth. To keep it relevant “we do need to tailor our curriculum in ways that better match these needs and teach these skills more explicitly,” Sanders noted. “We need to frame college differently, holding on to preparing students for careers, but making primary the need for them to become excellent learners in broad areas of learning.”

One of the greatest challenges to college graduation is retention. According to US News and World Reports, as many as 1 in 3 first-year students won't make it back for their sophomore year. “Students need very meaningful academic experiences in the first year, or they won’t stay,” Sanders said. Students should see college as a process of becoming an educated person rather than a checklist to get a job, he added. By doing that, “So many of their struggles will become easier to address because they will see meaning in what they are doing.”

According to Powell, another big obstacle for those who want to attend college is financial. Powell & Natasha Quadlin’s book Who Should Pay?: Higher Education, Responsibility, and the Public reports that Americans are well aware of the costs of college and the staggering debt that so many college students and their families have. They note that this is the reason why Americans increasingly believe that the government should take more responsibility in funding college. “If we want to encourage a college education, the best way to do that would be to eliminate the financial barriers to college that all too many Americans face.”

Education benefits everyone. But education may not mean getting a college degree,

“When we talk about college or higher education, it’s important to clarify that it’s not only about the bachelor’s degrees but also involves other certificates and degrees that individuals can earn beyond high school, such as technical certificates and associate degrees,” said Sophie Nguyen, Senior Policy Analyst, Higher Education at New America.

There are a lot of professions that are needed for a well-functioning society that don’t require so much time and investment in a four-year education. “And for many first-year students, this path better meets their goals,” Sanders added. That means there are other valuable and viable paths to positive socio-economic outcomes. “What is important is that everyone gets some kind of post-secondary training, education or credential. Education benefits everyone, but we need to make sure we are supporting all kinds of paths toward that end,” Sanders said.

In all, there are many reasons students may decide to go to pursue college or another form of education -- from wanting the potential for a higher income, to deciding to learn a new skill. Sanders believes that education is not only relevant, but critical to our world’s future success. “The problems we are trying to solve in the world are complex. Twenty-first century job skills are those broad-based problem-solving skills that a college education gives you,” he said.