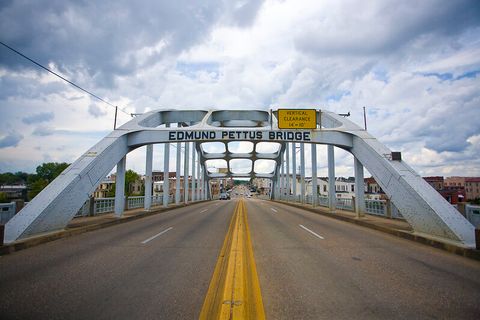 Two years ago, a good friend commemorated her 50th birthday by traveling to Selma, Alabama, to walk across the Edmund Pettus Bridge and then visit as many places along the United States Civil Rights Trail as she could manage. The Trail, officially designated on January 1, 2018, and sponsored by the National Parks Service and the Trust for Public Land, includes hundreds of sites across fifteen states, like Monroe School in Topeka, Kansas, where Linda Brown Thompson had to ride a bus to school rather than attend the one in her own neighborhood (which led to Brown v. Board of Education); Martin Luther King’s childhood neighborhood in Atlanta; and dozens of other sites the Trust helped local communities preserve and honor. Students can use an interactive map to follow the trail—or to plan their own trip—here.

My friend had limited time, so she focused on Alabama—Birmingham, Tuscaloosa, Montgomery, and Selma. It was in Selma that she discovered the Selma Interpretive Center, which is self-described as “a welcome center for the Selma to Montgomery National Historic Trail and located at the foot of the Edmund Pettus Bridge. Visitors can explore exhibits and a bookstore dedicated to telling the story of the movement.” It was in this small center, near the very back, that my friend saw a round button/pin with the word “NEVER” on it—a white supremacy statement against integration worn by members of the Ku Klux Klan and others. This pin inspired her to come home and create her ALWAYS button, “a proud anti-racism statement to be worn by those who always support racial equality #AlwaysPin.”

I’ve written about my Always pin before; two years on, I am still getting lots of questions about it. And as Martin Luther King Jr. Day approaches, I’ve come back to it again and to the Civil Rights Trail and what is to be learned by visiting it, even virtually in these pandemic times. Today, I traveled virtually across the Edmund Pettus Bridge and listened to President Obama’s speech on March 7, 2015, in honor of the 50th anniversary of the Selma to Montgomery march, during which peaceful marchers were beaten bloody—and John Lewis nearly killed—as they stood up for civil rights and for freedom for all.

I also explored the US Civil Rights Trail’s video gallery, which houses oral history videos such as Mississippi State Senator David Jordan’s haunting description of scraping together $1.00 for gasoline to drive to Sumner to witness the December 1955 trial of the two white men who murdered 14-year-old Emmett Till—a crime they clearly committed but for which they were promptly pronounced “not guilty.” In quiet, understated tones, Jordan tells of deciding to go to Sumner with his brother to see for himself what a US trial was all about and of hearing rumors that Emmett Till was alive and well, recently seen in Chicago, and that his murder was just a “gimmick” by the NAACP to increase membership (!). Of hearing Till’s broken body described in dramatic contradistinction to the misinformation and lies. Of watching the defendants drinking Coca-Cola and laughing. Of realizing that “no one was serious,” and that “this trial was just a mockery of justice.”

I have just begun to scratch the surface of the oral histories and other materials available, all of which make me hope to travel at least part of the Civil Rights Trail in real life. More important, they make me hope that our students take an opportunity—soon—to visit some of these virtual sites, that they see which of the hundreds of civil rights sites are closest to them so that they might visit in person, and that they take time to travel back to 1955 to see what they can learn about that year in our history and to write about what they find. If they have relatives who remember 1955 (or another year during the height of the movement), perhaps they can even gather oral histories of their own. Regardless, I would ask students to focus on at least one key moment in the civil rights movement, one particular spot on the Civil Rights Trail, and reflect on its meaning then, and now—on its meaning to their lives and hopes and dreams. That’s my wish as we commemorate Martin Luther King Jr. in 2022.

Image Credit: "Edmund Pettus Bridge" by miketnorton, used under a CC BY 2.0 license