A few weeks ago, I wrote about the challenges of finding on-ramps for students who have disengaged from our courses. Students disengage for a variety of reasons, most of which we as instructors cannot control. We watch, frustrated, as students disconnect despite often herculean efforts from faculty and support staff.

But if I am honest, I know that every now and then, a struggling student steps closer towards withdrawal because of me—because of a careless comment, a look of frustration, a moment of brushing that student aside. In short, for whatever reason, I make a major teaching goof.

This semester, it happened on the last day before Thanksgiving break. I had set aside nearly two hours of our class time for students to draft their final project—an argument. We had spent the prior class composing a reflection on the two argument analyses we had written in preparation for the final project, and we had worked collaboratively on bullet point outlines of the final argument. Students had been asked to pull their notes and outlines together so that we could do the heavy drafting work during that final class session before the break. 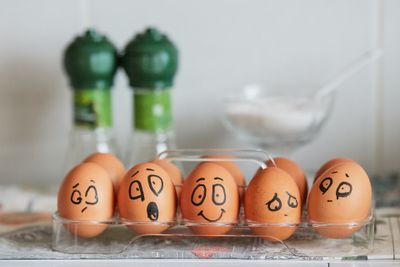 Image of eggs with emotions. Photo by Tengyart on Unsplash

On drafting day, I reviewed the assignment and worked with individual students as needed. I reminded students at various intervals about the importance of having at least two pages of the draft done so that I could provide some initial feedback over the break.

One of my students—a multilingual writer who has been tenacious in his efforts to stay on top of the process in the course—approached me a few minutes before our class writing session ended. The student had the reflection assignment from the prior class pulled up on his laptop. “Professor, I don’t understand what you want me to do.”

For a moment, I stared at him. We had just ten minutes left of a two-hour session. So I asked him if he had started the argument assignment. He shook his head, no. He had been stuck on this short reflection since the prior class.

And that’s when I goofed.

“You need to be working on the argument! The argument draft is due before you leave for break, and it’s our last major essay. This reflection is just a paragraph, so you really don’t need to be focused on that right now. Why didn’t you ask me about this last class? You really need to get started on the argument assignment.”

He mumbled something and went back to the desk where he had been working. I knew immediately that I had answered his “wrong question” with an answer that was even more wrong. But another student approached with a question, and I was distracted. My multilingual student carried my very wrong response with him when he left class for the break.

Fifteen minutes later, a cup of strong coffee in hand, I began to berate myself and imagine all the right answers I could have given, how I could have answered his question (legitimately) and used that answer as a transition to the argument assignment. I ticked off the potential concepts or skills we could have strengthened—reading assignments, understanding vocabulary, prioritizing work, identifying and overcoming roadblocks. I thought of the questions I could have asked to help the student articulate the specific aspects of the assignment that did not make sense to him. I could have walked through the first few sentences of the reflection with him. I could have given a sample, created a visual—I could have (and should have) done any number of things other than what I actually did.

Shortly after I got back to my office later that day, I drafted an email: a short apology, some additional questions, and then a description of how I would approach a reflection assignment such as the one which had stumped him. I offered an appointment and reminded him about my office hours—and hit “send.”

He did not respond to my email, but he did add drafts of both the reflection and the argument to our shared folder for my feedback. I look forward to reaching out to him again in class. If all goes well, he will finish strong and engaged—despite my mistake.

How do you recover from professorial goofs?

Want to offer feedback, comments, and suggestions on this post? Join the Macmillan Community to get involved (it’s free, quick, and easy)!

I think an email apology and answer to the student's question is always appropriate. Students aren't used to having "authority figures" apologize and admit mistakes, nor do they ever consider that perhaps we are rushing off to our next class/meeting/thing and aren't always as thoughtful as we'd like to be. You followed up and that is important!

About the Author
Candace Timpte has taught biochemistry and biology in open access colleges since “we used chalk on chalkboards”. She has been teaching at Georgia Gwinnett College since 2007 as one of the second-wave hires of 100 faculty to expand from the charter 10 faculty. GGC has grown from 500 to over 13,000 students during her time there. Candace was awarded the first Georgia Gwinnett College Teaching Excellence Award and the USG Board of Regents Teaching Excellence Award for the state of Georgia. She loves to teach and learn from the diversity of students she encounters.
Topics