First-Day Activity: What Is Truth? 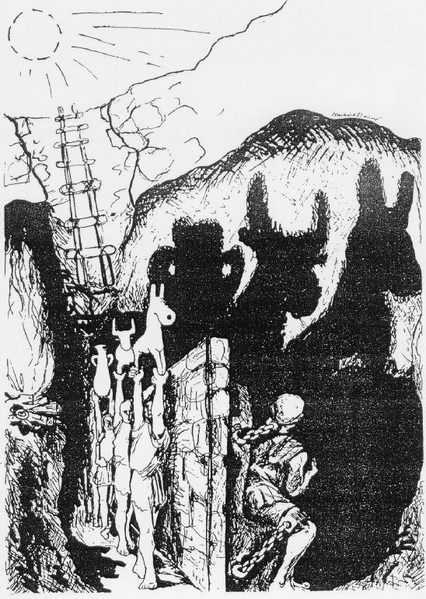 Four years ago in the Bronx, I taught Plato’s “Allegory of the Cave” in a first-year writing course. New York City was still emerging from the impact of Hurricane Sandy, and the trauma of unanticipated change was very much on all of our minds that spring. “Allegory” was a required text in this student cohort’s Introduction to Liberal Arts class, as well as in our writing course. In our course, the program required that we read a novel from a preselected list. That was how I came to teach The House on Mango Street with “The Allegory of the Cave.” Our focus, growing organically out of students’ writing and class discussions, became the significance of education, and the development of resilience in difficult times.

Four years later, “Allegory” seems equally relevant, and brings back memories of studying this text as a first-year student many years ago. My first-year liberal arts education did not include a first-year writing course. Instead, I wrote weekly papers for Introduction to Philosophy, gaining an understanding in basic concepts of theory and rhetoric that has kept me grounded both in and out of the academy.  As a result, I remain convinced of the value of a liberal arts education for all students, across majors and disciplines.

From that experience of education emerged a key question that still holds value for a first-year students: “What is truth?”

Because students enrolled in our institution’s Stretch program have the benefit of having the same teacher and cohort across two semesters, I already had an awareness of students’ concerns with growing as writers. Indeed, as I read students’ reflective writing after the election this past November, I began to brainstorm readings for the spring semester. My goal was to begin in January with a reading that would take up the themes of change and transitions with the question of “What is truth?”

In the fall, we had briefly discussed Bob Dylan’s Nobel Prize, and over break I listened again and again to Patti Smith’s rendition of Dylan’s “A Hard Rain’s a-Gonna Fall,” which she performed in Oslo as part of the Nobel ceremonies. “Hard Rain” is the story of a prodigal son who has returned to his community to tell the truth of his experiences. “Allegory” is the story of leaving the Cave for the light outside. When a person returns to the Cave, the Cave’s inhabitants do not believe the truth of the world in the light outside.

Different experiences, different truths: How does the audience for “Allegory” make sense of these differences? In other words, “What is Truth?” remains both a contemporary issue and an ancient rhetorical question.

In teaching and learning Plato’s “Allegory of the Cave” or any difficult text, an important strategy is not to abandon the text at the first signs of students’ struggles. Indeed, those struggles can become significant points for discussion and close re-reading. At the same time, it can be helpful to pair the text with more contemporary and accessible sources so that the students can synthesize rhetorical and thematic relationships across time and place. Those sources may be required by our writing programs, open for us to choose, or selected by students in collaboration and on their own. In any case, the search for truth continues and I look forward to why and how we will address this subject in class this semester.

With these thoughts in mind, we completed the follow activity on the first day of the course, in preparation for taking on the first writing project of the semester:

Consider the meaning of this following passage from Plato's "The Allegory of the Cave."

And do you see, I said, men passing along the wall carrying all sorts of vessels, and statues and figures of animals made of wood and stone and various materials, which appear over the wall? Some of them are talking, others silent.

You have shown me a strange image, and they are strange prisoners.

Like ourselves, I replied; and they see only their own shadows, or the shadows of one another, which the fire throws on the opposite wall of the cave?

True, he said; how could they see anything but the shadows if they were never allowed to move their heads? (Plato)

What connections do you find between “Allegory” and the two interpretations of “Hard Rain”? Make a list of those connections, offering specific examples to support your ideas. Use this list as your study guide for your first reading of “Allegory.” When you reach a difficult place in the text, consult the list. We will discuss and write about “Allegory” in our next class.

About the Author
I am a writer and teacher living in Queens, New York. My book is "Teaching Developmental Writing" 4e. Other recent publications include “Theory in Practice: Halloween Write-In,” with Ian James, William F. Martin, and Meghan Kelsey in Basic Writing eJournal 16.1, “An Unconventional Education: Letter to Basic Writing Practicum Students in Journal of Basic Writing 37.1, “Occupy Basic Writing: Pedagogy in the Wake of Austerity,” in Nancy Welch and Tony Scott’s collection Composition in the Age of Austerity.
Topics